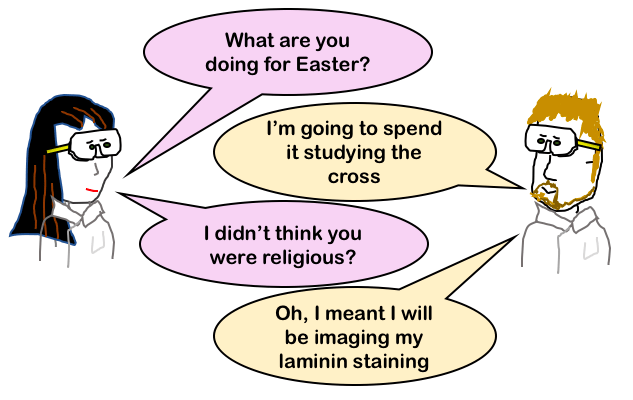 Laminins are known as “God’s molecule”. In most textbook images they are drawn as cross-shaped with three short arms and one long arm due to their appearance in rotary shadowing electron micrographs (see below). Laminins get billed as the glue that holds the body together and that, coupled to a verse in Colossians 1:15-17, and along with their apparent structural similarity with the Roman execution method of crucifixion was picked up on by Evangelical preacher Lou Giglio. His mass popularity has created a movement and now you can buy laminin jewellery, music, food supplements etc!

Laminins do a lot more than hold your tissues together, so I am looking forward to the next sermon on laminins regulating differentiation, preventing tumour invasion, providing a substrate for cell migration and as a signaling platform!